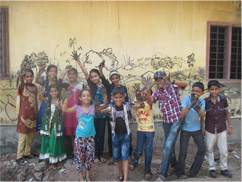 Appooppanthadi was an art camp I directed for school children at Ottapalam. The camp was organized by members of M.P. Govinda Menon trust in December 2012. After conducting a painting competition we selected eleven students from Ottapalam suburbs. All the kids were given painting boxes, pencils and charcoals as a privilege for getting selected in the same. Even though it was a small camp of 3days I was given complete freedom to conduct and implement my ideas so that it turned out to be a great experience for myself. In these small time span of 3 days I was able to jam pack so many art activities so that the kids never felt bored.

In addition to the 3 day camp we took the children to Mattancherry where my friend, the sculptor Nandakumar was working on his Biennale collateral show ‘Land Reformed 1’and they were able to participate in the preparations. During the camp days we arranged lecture demonstrations of local art forms in addition to the modern art and the kids got a chance to see the traditional arts like ‘Thol pava Koothu’ (shadow puppetry), ‘Poothan’, ‘Thira’ and ‘Kuthirakettu’ which are so much localized in Ottapalam suburbs. Thus the local traditional artists also got a chance to show and talk about their art alongside the modern artists.

The inaugural function is done in a nice fashion by fluttering an ‘Appooppanthadi’ by a small girl. Many renowned artists, art lovers and well-wishers participated in the program and it became a real festival in the small town.