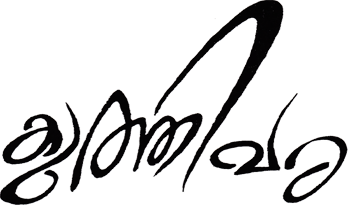 This was the first painting exhibition my students did here at Chithrasala Art gallery, Kerala Lalitha Kala Akademi at Thrissur. A group of students decided to exhibit their art works during a summer vacation. The brochure, poster and banner were designed by them. When it came to naming the show they thought ‘Kuthivara’ (meaning ‘The scribble’) seemed apt for it.

Not only the name or design but the theme also was designed and executed well by the students. All six of them dressed in six different colours (Violet, blue, green, yellow, orange and red) to represent the colours of the rainbow (Indigo was omitted maybe because it was a difficult colour to make or because they were only six). For the inaugural function they performed the importance of the colour they represented by putting the swatch of that colour on the white board provided. The inaugural ceremony was performed by Art historians Vijayakumar Menon and K.C.Chithrabhanu by drawing a scribble on the white board on which the coloured swatches were being made. Many artists participated in the inaugural function.

The show was unique in itself by exhibiting not only the completed painting but the sculptures, installations, sketches and even scribbles. There was a township Krishnadev did with waste materials which was the main attraction of the show. Ganga’s miniature vegetable garden was also called attention of many. The show was overflowing with art works as the students didn’t hesitate to exhibit all that they have done in the past years. The butterfly that Medha made out of her old slippers was really a piece of art work which later got exhibited in a collateral at Biennale at Mattancheri. There was one very interesting story of our house cat ‘Panchara’ narrated in the form of a comic strip by Ann Teresa. Aparna and Adithya were the other tenants of this enthusiastic group. In the beginning of the show Medha introduced all of her fellow team members by exhibiting their portraits as well as small interview chart that she herself prepared.

The show was a real success with many people coming from inside and outside the town to enjoy the artifacts.