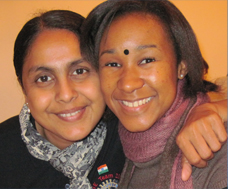 After my exhibition ‘Thattinpuram’ the rotary club of Ottapalam sponsored me to this Group Study Exchange Program (GSE) and I got selected to the team that was going to South Africa. With my team I stayed in Africa for more than one month. Though the program cannot be called completely artistic it was an interesting experience.

I got chance not only to see the country and her people but also to enjoy the art and culture there. I met many of the leading artists there – Willy Bester being one of them – and visited almost all the art galleries in the Western Cape. Art is always the key to any country and its people. Through their art I was able to see the whole history of South Africa with its slavery and discrimination.

There was one painting of Willy Bester in which a small baby was shown lying on the floor inside a frame on the handle of a spade. Later he told me that many of the coloured died in the mines, resulting in children getting orphaned and that was in his mind while doing it. Among the other interesting works I saw in the galleries were ‘The butcher boys’ and ‘Blind Alphabet’. I got chance to visit works on Kentridge. A visit to the Pan African Market was real fruitful. I was excited in seeing their masks and voodoo dolls. We visited many amazing places like Robben Island, Cango caves, Table Mountain and Waterfront. Reading the writings of Nelson Mandela and seeing his room in the Robben island jail was really exciting. We visited many projects too. The most interesting was ‘Jakalesa’ a typical dance school. It was nice to see their dance which is more concentrated in the body movements rather than facial expressions. At the time of our visit they were practicing for the coming World Cup football show that was to happen in 2010. We visited the curtain raiser of the World cup too where we got football tee-shirts which was real fun. I got a rare chance to try African drums (Jumbe) with the artist Tim Offbeat.

I had an amazing time enjoying their exotic wines, breads and coffees too. Though almost a vegetarian it was not difficult to find the foods that I enjoy. In fact there were many salads that I enjoyed. The cheeses were in amazing variety. We rode Ostriches, visited vineyards where we did wine tasting and many a time did cook for our hosts and friends too. On many occasions I prepared ‘Paal Payasam’ (traditional Kerala milk pudding) and on one occasion I cooked our ‘Pazha Pulissery’ (a curry using banana and sour cream) and ‘thoran’ (dry vegetables). The best part was my travel on a weird motor cycle with my friend Peter there. We went 200kms/hr and it was like taking off in an open aircraft. I felt like I was flying: an experience impossible here on our Kerala roads! The different clubs there arranged different parties for us where we had the presentations during which I and my friend Pooja performed dance items. During the international Rotary conference too I performed a Mohiniyattom number: the ever famous lullaby ‘Omanthingal kitavo’ by Irayimman Thampi. I dedicated this to the children of Africa.

After the main program was over I stayed back with my friend Bulelwa Basse who was a member of GSE of our host team from South Africa. This stay, though a short one did prove really fruitful. I met the famous African percussionist and musician Neo Muyanga. Bulelwa took me to night cafes where we saw movies and performances. It was from here I got the idea of performing the poetry (later on I tried this with Malayalam poetry) which was a common thing in South Africa. I met Bulelwa’s mother and grandmother and visited many small townships with her. Finally at the time of departure I never felt that I am leaving Africa forever; the feeling was that I will go back there again to practice my art. I have intercultural ideas in mingling my art with the art of Africa. I keep my options open.